Longtime characters that have never shared a scene. 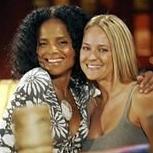