Brady walks into the main room of Anita's cabin, as she sits on her sofa reading the paper. Hearing Brady come into the room, she looks over her shoulder to see him putting his jacket on.

ANITA: Going somehwere?
BRADY: Not far. Just gotta meet with that woman I was telling you about.

Anita sets down the paper and turns her body toward Brady. She looks on, pleasantly surprised.

Anita pulls her reading glasses from her face, and shakes her head in amazement.

ANITA: I'm telling you, today's technology is a miracle.
BRADY: Tell me about it. From when you told me about it until now, we're looking at about...ohh...about a four hour turnaround time. Crazy, huh?
ANITA: You better believe it. If I'd have known how much I could get done this fast, I'dve gotten on this internet years ago.

Brady and Anita laugh, as Brady opens the door to the cabin to head out.

BRADY: Right? Okay, I've gotta meet this woman at the general store in about 10 minutes, so I'll be back in about an hour. Hopefully minus one blue SUV.
ANITA: ...and plus a thousand dollars or two.

Brady points at Anita, agreeing to her point.

Brady shuts the door to the cabin behind him, leaving Anita behind, as she looks over at the PC sitting in the corner. She contemplates sitting down to use it.

ANITA: Well...you've seen enough people use it, Anita. About time to try it for yourself, no?

Anita hesitates as she steps towards the computer, sitting down in the office chair. She rests her fingers on the keyboard. She looks up at the screen, a determined look on her face.

ANITA: Besides...you've got some work to do.

Laura sits with JJ on the bench at Horton Town Square. JJ hugs a despondent Laura.

JJ: No one is going to hurt mom, or Abigail, or me. You got that? I'm gonna make sure of it.

Releasing Laura from his hug, Laura looks down, suddenly no longer hungry. She gets up to throw her partly-melted ice cream sundae in the nearby garbage can, and turns back toward JJ.


JJ looks at Laura with a hint of determination in his eyes.

JJ: Grandma, we have no choice. If I refuse this money, it'll just force mom even further toward Liam. This way, Liam thinks I'm pacified, and I'm far enough removed that I can do some digging in safety. This way, mom, and Abigail, and you are safe.

Laura takes a moment, before slumping down beside JJ on the bench. She nods, fully understanding JJ's position.

LAURA: You're right, JJ. There's no other way.

Nick sits in the exam room, on the exam table, as Daniel taps away at his tablet, editing Nick's chart. Nick looks on, still hazy from his fall.

Maggie stands by Nick, a hand on his back, being concerned for her relative.

NICK: Dr. Jonas, I don't mean to rush you but...I have somewhere to be.

Daniel doesn't look up, still fixated on his work on the tablet. Despite this, he answers Nick immediately.

DANIEL: Yeah, well, I'm not quite done yet. One more question...did you...prior to this fall you took today...did you suffer any other head injuries recently?

Nick looks up at Daniel, before having a flashback to the night he was dumped in the river. Nick remembers being on top of Gabi, and being hit in the head with a rock. 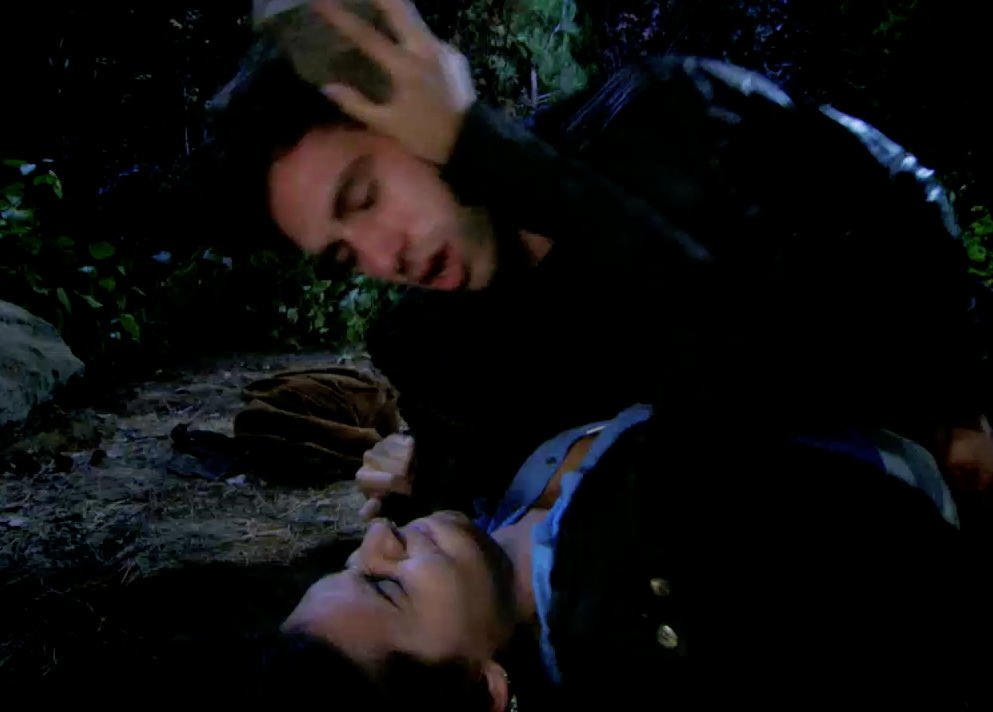 As the rock makes impact with Nick's head, Nick snaps out of his flashback, immediately locking eyes with Daniel.

NICK: Yeah. Yeah, I did. But uh...it wasn't anything major.
DANIEL: Well, sometimes these injuries sort of...lie dormant for awhile before symptoms appear. I might want to schedule some more tests for you.

Nick looks at Daniel, sighing as he worries about missing the Titan board meeting.

NICK: Ah...Dr. Jonas. I'd love to do that but...can we schedule these for another time? I...I'm really running behind.

Maggie steps in before Daniel can respond, voicing her concern to Nick.

MAGGIE: Nick...I know you're eager to get back to work, but...Honey... head injuries are so unpredictable. If you don't stop and think about your health for a moment...it could kill you.


Nick looks up at Maggie, affected by her grave warning, but unsure whether or not to proceed.

Jordan sits in her office, consumed by the realization that her safety is in jeopardy thanks to Nick. She plays with her engagement ring nervously, as she stares straight ahead, oblivious to everything around her.

Jordan looks on, unblinking, unmoving. She fixates on the point as she continues to fidget with her engagement ring.

JORDAN: As long as he's alive.

As she receives a notification on her phone of a voicemail, she snaps out of her trance, and looks at it. Knowing it's from Sheryl, Jordan ignores it, and quickly gets up from behind her desk.

Scooping up her phone, and realizing the time, she grabsher tablet and heads quickly out into the hall.

JORDAN: Gotta get down for my 5pm.

Closing and locking the door to her office, she quickly walks down the hallway, and into the main lobby. As she steps into the lobby, Maggie steps out of the exam room Nick is in with Daniel. Out of the corner of her eye, she spots Nick inside. Quickly turning to Maggie, she nervously smiles.

Maggie smiles, a bit nervous herself from all the health crisies in her family.

Maggie furrows her brow slightly, still smiling, but with a curious expression on her face.

Maggie hesitates a moment before continuing.

MAGGIE: I didn't realize you knew Nick.
JORDAN: Oh, we...we only met once or twice but...well...you know me, always concerned.
MAGGIE: Oh, I know. And I appreciate it...

Maggie looks down, spotting Jordan's engagement ring. Her face lights up with excitement.

Jordan takes a moment to realize what Maggie's referring to, before Maggie takes her hand and Jordan happily extends her hand out to show off her ring.

Maggie looks at the ring, holding Jordan's hand in hers. She looks up at Jordan, a seriousness in her voice, but with an earnest joy.

MAGGIE: Jordan, it's beautiful. You're a very lucky woman. And Rafe is an extremely lucky man.

Jordan begins to tear up at Maggie's kindness. They exchange a warm, congratulatory hug.

Inside the exam room, Nick hops off the exam table, and readjusts himself, preparing to leave. Daniel looks up at Nick, putting his tablet down on the counter.

NICK: Look, Dr. Jonas. I appreciate that you wanna help and all, but...I need to schedule these tests for another day. I'm already way behind for this meeting I've got to get to today.

DANIEL: You know, I wish you would go in for the tests right away but...I can't force your hand. Look, I'll see if I can schedule you for first thing tomorrow morning, and if I can, I'll give you a call on your cell. Okay?
NICK: Appreciate that.

Nick extends his hand to Daniel, and they share a firm handshake, as Nick grabs his laptop case from beside the exam table.

Nick stops as his hand is on the doorknob, ready to step out of the room.

DANIEL: You're not on any medications, right?

Nick looks at Daniel, shrugging off his recent pill popping.

NICK: Ah...no. Just...since I've been having these headaches I've been taking Aspirins whenever one flares up, but...nothing more than that.
DANIEL: Hmm, ok. If anything that should help your blood pressure. (sigh) Okay. Yeah, I'll see you tomorrow morning.
NICK: You got it. Thanks, Dr. Jonas.

Nick walks out of the exam room, and closes the door behind him. Taking a second, he texts Gabi.

He smiles as he hits send. He then puts his phone in his pocket and walks away.

Jennifer and Liam sit out at a table outside the café at Horton Town Square, laughing and holding hands.

JENNIFER: It was a great idea to bring me to lunch. Thank you, Liam.
LIAM: Anything for you, Jenn. You don't know how much it means to me to have you in my life. I want to take every moment I can.
JENNIFER: Me too. And I wanna thank you as well. Your gift to JJ was...beyond what I ever expected. I mean...where did you even FIND that kind of money to give away like that?

Liam stumbles momentarily, trying to find an answer, as JJ and Laura approach them. Jennifer spots them and waves, beaming as they approach, a more solemn expression on both their faces. Liam turns as well to see who's approaching.

JENNIFER: Hey JJ! Mom! What are you two up to?
LAURA: Oh, JJ and I had some free time before I had to head back to the hospital, so I took him out for lunch and we grabbed a frozen yogurt. And you?

LIAM: Well, Jenn and I were just having a quick lunch break together.
JENNIFER: We've already ordered but would you like to join us?

JJ nods while looking over at Laura, who looks equally stoic. Laura then turns her attention back to Jennifer, feigning a smile through her nervousness.

Liam gets up to pull up a chair for Laura, who sits down, looking over graciously at Liam. JJ grabs a chair for himself and sits down as well.

LAURA: Thank you. Ah, so...how's your day been, everyone?
JENNIFER: Oh, fantastic. Liam and I were talking before about the family cabin on Smith Island. It's really beautiful going out there this time of year.

Jennifer looks over at Liam, excitement in her eyes as she reaches her hand out to tap Liam's thigh.

JENNIFER: You know, I've got the long weekend free, why don't we go up together for a quiet weekend, just the two of us?

JJ and Laura try unsuccessfully to hide their discomfort at the idea, while Liam looks back at Jenn uncomfortably as well.

LIAM: I ah...Jenn, I'm sorry. I have contractors coming up to my house this weekend, I've gotta...supervise them. Need to...put on a new roof.

JENNIFER: That's fine. I'll just come up there with you. I haven't seen the house yet, and all.

Laura nervously observes the exchange, as Liam squirms yet again.

JJ eyes Liam studiously. Observing something is strange in his behaviour, he interjects.

JJ: Hey! I ah...I forgot to mention, Liam. (sigh) I ah...I decided to take you up on your offer. I'm accepting the cheque. I put in my acceptance at Stanford for the winter semester.

JJ looks Liam dead in the eyes as Jennifer looks at JJ, once again excited for her son.

Liam looks back at JJ, a smile on his face, but both men barely blinking, as they look each other dead in the eyes.

LIAM: It's my pleasure, Jenn. Anything to help you and your family.

JJ remains locked in with Liam, as Laura looks on, eyes darting back and forth between the two men, and reading the tense body language between them.

Outside the country general store, Brady leans against Anita's old blue SUV. He checks his watch as from around the corner, a taxi pulls up. A woman steps out of the car wearing a navy blue trenchcoat, sunglasses, and a sheer white kerchief over her head, disguising her flame red hair.

She hands the taxi driver money, and he takes off. She strides confidently over to Brady, who looks at her with interest.

Brady pulls himself upright off the front of the truck fender, and extends a hand to shake Sheryl's.

BRADY: And you must be...
SHERYL: Crystal. Crystal Clarke.