Billie sits at Theresa’s bedside, holding her friend’s hand, watching her comatose body rest. Billie looks on, solemnly, and deep in thought. She smiles after a moment.
BILLIE: Theresa. It’s me. Billie.
Billie stops a moment as she watches her friend lie in silence. The only sound in the room is the machinery around her bed, the beep of her heart monitor. Billie fights the urge to tear up, and smiles instead.
BILLIE: You know, I was thinking the other day...about one of our phone calls. You were fifteen and you were so mad at your Dad because he was…off on another ISA mission, and you had made plans with him for the weekend to have a ski trip in Colorado. You were…so upset, but you told me that you knew that you had to be there for your mom. You knew what she was in for when your dad left…I….I know you love your mom, Theresa. No matter what she’s done…underneath all that anger.

Billie’s tears up, in spite of her best efforts. The door to the room opens, startling Billie. Daniel walks in, allowing Billie to relax a bit. She gets up from her chair, regardless.
BILLIE: Daniel…
DANIEL: You…probably shouldn’t be here right now.
BILLIE: I know. I just…I needed to cool off a bit.
Daniel looks on, concerned, noticing Billie’s teary eyes.
DANIEL: Yeah, I’m not so sure you succeeded at that.
BILLIE: Yeah. Really.
Billie wipes the tears from her eyes, and puts her hands on her hips, trying to regain her composure.
BILLIE: Look…uh…Daniel…about…earlier.
DANIEL: Billie, I…I can’t talk about it, you know that.
Billie holds up her hands to stop Daniel continuing.
BILLIE: I know. Look, it’s…it’s not about that. I just…look, I know we haven’t been together very long, but...you know…listening to you talking to Laura and…doing…whatever you’re doing to protect Jennifer…I…I mean…
Daniel looks at Billie with uncertainty.
DANIEL: What are you saying?
BILLIE: Daniel, you’re still in love with Jennifer, aren’t you?
---

Nicole slams her files down on her desk in frustration. Sighing audibly, she begins talking to herself aloud.
NICOLE: And yet again, my shadow follows me. (sigh) Except now I gotta work for her. Dammit!
As she raises her fist in aggravation, she stops herself.
NICOLE: Having said this...EJ did give me the go-ahead to do the EnerNext exposé...
Nicole smirks a bit, realizing how this could work to her advantage.
NICOLE: Maybe that little bastard Nick isn't such a bad guy after all.
Laughing to herself, Nicole is suddenly interrupted by a text message. Searching momentarily for her phone, she finds it. Picking it up, she swipes over to check her messages.
It's from Eric.
meet me @ Anderson park 535. dont b late, its important. Love, eric
Nicole looks a bit concerned. She scrunches up her face.
NICOLE: Hm! Wonder what HE wants. Maybe he's finally made up his mind...
Nicole stops herself a moment before continuing, laughing sarcastically.
NICOLE: Right. Maybe the Pope's become an atheist too! God, I need a drink. Good thing TBD's near the park.
Nicole grabs her files, shoves them hastily into her briefcase before grabbing her coat, and heading out of her office.
---

Tyler sits uncomfortably in his seat in Victor's office at Titan, as he tries to talk his way out of his dismissive comment against Maggie he just made to Victor. Victor, meanwhile, stands in the corner of the room, sorting through some documents.
TYLER: I...I'm sorry, Victor. I didn't realize...Maggie was...your...wife.
Victor turns, smiling wryly as he saunters over to his desk, slowly sitting himself down in his executive chair.
VICTOR: I had a feeling. Personally, I'm amazed you've made it this far in business without learning to do your due diligence. A man in your position could stand to be a bit more careful.
Tyler swallows hard, nodding fervently as he swivels himself slightly to reach a jug of water on Victor's desk. Pouring himself a glass, he continues to backtrack.
TYLER: Well...knowing what I do about Maggie now...I...well...she'd be a great fit. I will say though...
Victor glares Tyler's way as Tyler continues to fumble.
TYLER: You, uh...you might want to take a few days to...you know....assess the situation.
VICTOR: Well, naturally, I'll be attending to some other things, dealing with the last of Brady's affairs with Titan, and handling the selloff of Titan TV.
Tyler, suddenly snapping out of his own worries, remembers something important to bring up to Victor. Scurrying to grab his tablet, Tyler gets up from his seat, and walks to Victor's side of the desk.
TYLER: Speaking of which, you uhh...you might want to look at this.
Tyler hands Victor his tablet, showing the news report, revealing DiMera Enterprises has acquired Titan TV. Victor's rage escalates immediately.
VICTOR: Dammit!
---

Gabi walks carefully down the steps onto the foggy pier, looking cautiously around for Liam. Spotting him approach through the mist, she looks nonchalantly about before heading his way.
Gabi cautiously looks around before speaking to Liam, who never quite looks her in the eye as they chat.
GABI: Have you got it?
LIAM: Yeah.
Gabi looks at Liam intensely suddenly, holding out her hand in anticipation, but Liam doesn’t hand the bag containing the pills quite so quickly.
LIAM: NOT…so fast. I didn’t go to all this trouble for you to just grab and go. You need to understand a few things first.
Gabi breathes quickly, very uncomfortable suddenly with a very intense Liam.
---
---

I'm glad you made it.
I don't want to dwell on the past anymore. Someone very close to me gave me some excellent advice. "What matters is that you're happy". Well, Nicole. You're what makes me happy.
8-3-5

Nicole looks up.
NICOLE: 8-3-5? What the...?
Jarred by the abrupt end to the letter, she begins looking around again. She notices a single red rose on the ground on the other side of the bench. Tilting her head around, she approaches it.
Picking it up, she sees a trail of roses leading into a larger, but dimly lit clearing on the other side of the bushes. As it's getting dark, she fishes through her bag to pull out a small flashlight she keeps on her keychain.
Following the trail leads her to a small box with a combination lock on it.
Nicole studies the box carefully as she picks it up. A song gently begins as she does.
(0:13) Nicole checks the note again and begins to plug in the combination.
---

(0:26) Valerie hears her office phone ring at the hospital, as she prepares to leave for the day. Picking up the receiver, she's immediately upset by what she hears on the other end. Tearing up as she shakes her head, she responds to the person on the other end shortly before hanging up.
---
(0:51) Jerome looks straight ahead, a distant blank look in his eye as the phone is placed back down at the police station. Hope looks on, now more distracted and concerned than she would normally be on the job. She tries to speak to Jerome.
HOPE: Is she on her way?
Jerome doesn't answer, lost in his own mind, he doesn't even look Hope's way.
HOPE: Jerome?
Knowing he's not paying attention, Hope carries on with the paperwork, sighing in resignation.
---
(1:30) Billie drives down the road, deep in thought about her friend Jennifer and the insecurity she feels about her relationship with Daniel, as well as the tragic circumstances that have led to her close friend Theresa ending up in a coma she may not wake up from, and Kim barring Billie from visiting Theresa in hospital.
Distracted, she begins to veer into oncoming traffic.
(1:55) She catches herself as a horn blares out, causing her to quickly jerk the steering wheel right, pulling her car over to the shoulder. Braking hard, she begins to tear up. Resting her head against the steering wheel, she lets her emotions out, crying hard in her car.
---
(2:08) Victor sits alone in his office, the headline of DiMera taking over Titan TV resting on his desk.
Victor looks over to see a picture of Brady looking back at him. He stares into it, wistfully.
---
(2:30) Nicole finishes setting the combination on the box, and opens it.
Seeing a beautiful diamond ring, she takes a step back, trying in vain to hold back from crying.

(2:45) Eric appears, as a series of lights are turned on via dimmers. Eric smiles warmly at a teary-eyed Nicole. 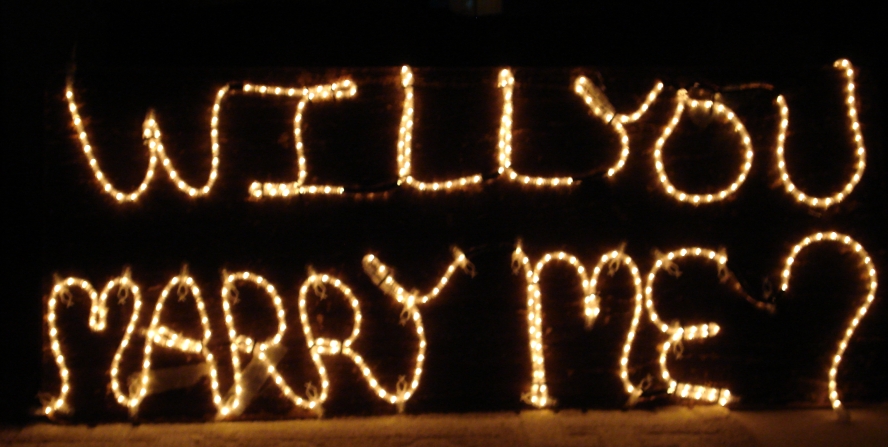 The lights are strung up to read "Will you marry me?". Nicole reads them over, and tears up even more.
ERIC: So...I've been doing some thinking.
Nicole laughs through her tears, Eric joining her. Nicole responds as she wipes her tears away.
NICOLE: I can see that.
ERIC: I just want you to know that...if doing the right thing means a life without you...I don't want that life.
Nicole wraps her arms around Eric, moved beyond words.
ERIC: Nicole. I love you...so...much. So...what do you say?
Nicole breathes in deeply, as Eric gets on one knee to put the ring on her finger.
ERIC: Nicole Walker. Will you marry me?
(3:34) Nicole shouts out her answer, bouncing in place, still freezing.
NICOLE: Oh my God, YES!
Eric puts the ring on, lifting Nicole into the air for a passionate kiss that they wish would never end. Eric and Nicole's hands wrap around each other, holding each other tightly as they kiss with an intensity that heats up the cold evening.
When they do end their kiss, Nicole rests in Eric's arms, as they tenderly hold each other, Nicole's tears still smearing her mascara. Eric looks on with a look that shows he's finally at peace.
---
Share
Followers 0