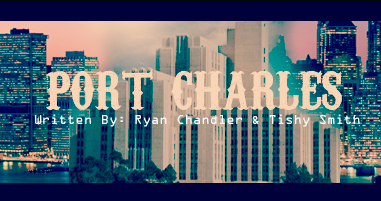 Welcome to the third edition of the Port Charles Chronicles. A weekly look into the lives of the families in Port Charles. We, Ryan Chandler, Jennifer Snyder and Tishy Smith are here to answer any questions that you may have regarding Port Charles. We want to thank you all for your comments and questions and please feel free to direct questions our way.

CARLY AND HER TWINS ARE IN DANGER

Nikolas watched in horror as his pregnant fiancée is run off the PC Connector Bridge. The outcome will have lasting consequences on the couple, as well as the entire canvas.

"Nikolas was on the phone with Carly, who's driving to Wyndemere at the request of him, when something goes wrong with her car," sets up Tyler Christopher (Nikolas). "Apparently her breaks were cut and she's run off the bridge by a black sedan." Nikolas can see the bridge from Spoon Island and watches as his love crashes into the water.

Nikolas freaks out as he's not only worried about Carly, but his unborn children as well. "Carly is thrown from the vehicle and will suffer some serious internal injuries that affect the lives of her twins," shares Tyler. "It's set up pretty well. The writers have done a good job of making sure this story plays out well."

Meanwhile, the doctors who are attending Robin & Patrick's pregnancy party are called to work (David for Alan and Steven, Kelly and Elizabeth for Carly). News of Carly's accident begins spreading through town and will eventually get back to Sonny and Jason. Jason's at the hospital when he learns of Carly's accident and immediately goes into blame mode.

"Jason blames Nikolas for Carly's accident," previews Steve Burton (Jason). "If Nikolas hadn't pressured her into driving, none of this would have happened, at least in Jason's mind." Nikolas & Jason almost get into a fight, but it's broken up when Dr. Kelly Lee (played by Minae Noji) comes to Nikolas with bad news. Carly's slipping in and out of consciousness since being rescued. Complaints of pain in her uterus and contractions cause Dr. Kelly to examine Carly. Afterwards, it is revealed that Carly has a placental abruption. Things go from bad to worse and Nikolas is faced with a tough decision.

"Nikolas is asked to make a decision no man should ever have to make. Carly's going into shock and as more time slips by, both she and the babies are at risk. Who does Nikolas save? The love of his life? Or his children" previews EP/HW Ryan Chandler. The decision isn't going to be easy for Nikolas. "It's an impossible situation to be in, but I believe we handled it well. The fallout from this story will be massive. Not only will it wrap up some of the stories we have going on, but it will kick off huge stories for the new year."
<HR>
CASTING ROUNDUP

Maurice Bernard (Sonny Corinthos) - "Sonny makes a bold move against the man he holds responsible for Carly's accident," previews Maurice Bernard. This incident completely pushes an already fragile Sonny over the edge. Look for Sonny to be off canvas for most of the upcoming year. "Maurice Bernard will continue to be a part of Port Charles in a recurring capacity," says Tishy Smith. An exit interview will be posted with the actor next week.

Josh Casaubon (Blake Barrington) Josh asked to be released from his contract. "There was another opportunity that he couldn't pass up. We, as a team, couldn't stand in Josh's way. We appreciate all his work and wish him well in all his endeavors. Says HW Tishy Smith. Casuabon last aired on the Thanksgiving episode.

Kiko Ellsworth (Stan Johnson) - Stan leaves town to make more out of his life. He shares a nice goodbye with Lainey (Kent King) and his mother Epiphany (Sonya Eddy).

Jean-Paul Lavoisier (Dillon Quartermaine) - As rumored in the first edition of the Chronicles, there was one young actor who was ready to leave the show after feeling the character ran it's course. Unfortunately, JP chose to leave before the show finished writing his new storyline. The role will be recast.

Scott Bailey (Hunter Halloway) - The character leaves town after the fear of god is put into him.

Tristan Rogers (Robert Scorpio) - Robert literally dropped in from the sky during Robin & Patrick's party. Robert will be around for the forseeable future as a recurring character. Look for a big story to begin in 2008 involving his character.

Kristina Wagner ("Felicia Jones") - With Felicia's name being dropped by multiple characters, it's only natural to assume she'd return. Kristina has agreed to return to PC for a handful of episodes beginning this month. Maxie is going to need her mother in a big way soon.

Jeff Branson (Blake Barrington) - Jeff is now available for the role of Blake Barrington. The writers have admired his work on "All My Children" and wanted him for this role from the beginning. Now that he is available, the show eagerly snatched him up. His first airdate was yesterday.

Michael Cassidy (Dillon Quartermaine) - Most known for his role on "The O.C." as Zach Stevens and "Cliff Wiatt" on "Hidden Palms," the actor has signed a 6 month deal with PC. The writers wanted to see how audience reception was to his new storyline before offering a long-term deal. He can currently be seen on "Smallville" as Grant Gabriel.

Tom Welling (Laurence Gabriel) - This role was created specially for Tom Welling. Ryan Chandler says, "The story of Laurence Gabriel is a closely guarded secret. I will say this though, Tom Welling is perfect for this role." Tom Welling, a former model is best known for his work in the CW television show "Smallville" and the "Cheaper By the Dozen" movies.

Nikki Reed ("Cassandra") - The "Thirteen" star/writer and "The O.C." actress Nikki Reed has won the role of Cassandra. Cassandra will premiere on the same date as Trey. Many actresses tried out for the role however it was clear from the beginning that Nikki Reed has exactly what it takes to be Cassandra. No other information will be given out at this time.

Kristen Alderson ("Kristina Davis Corinthos") - The young actress has been bumped to recurring. Originally Kristina was to be written out, but after negotiation, it was decided to work around the actress' school schedule.

Wally Kurth ("Ned Ashton") - Wally asked to be let out of his contract so he could take time off to tour. Wally will tape as his schedule permits. Before he left, the actor pitched a return story that will benefit the show greatly. Look for Ned to make frequent out of town trips.
<HR>
BLIND ITEMS

DONE DEAL?: Show executives are close to finalizing a deal that would bring a major primetime star to the show was a lead villain. The actor currently stars on a very popular cable show and is a former daytime actor. Look for him to be connected to big players in town.

RETURNING?: Could a character thought to be dead return? If the executive producers have their way, this actor will return sure enough. The holdup? He's currently on contract with another soap opera...and it doesn't seem like he's willing to leave. Sources say the character won't return unless they can get this actor in the role.

BIG STORY FOR 08: We're hearing that a big story has been planned for 2008 that will bring back many fan favorites throughout the course of the year, in short-term roles. All of this will culminate in a big reveal. We're hearing the show's theme for 2008 is "Question Everything, Believe Nothing". Hmmm.......

Turns out that internet leak about big names departing GH is true (see above goings).

There is no Q&A section for this week due to the amount of news we had. To submit questions, please PM Ryan and/or Tishy.
<HR>
PREVIEWS
- Robert explains why he came back to Port Charles
- The doctors get emergency pages
- Nikolas scrambles to get Carly help
- Word spreads of Carly's accident
- Sonny worst fears have come true
- Anna exploits the vulnerability in Sonny's organization
- The Quartermaines celebrate Alan waking from his coma
- Jason & Nikolas play the blame game
- Nikolas is asked to make an impossible decision
Share
Followers 0