Sonny gets up from the sofa in his apartment, a bit angry as Will holds onto the contract from EnerNext, which he had attempted to present to Sonny. 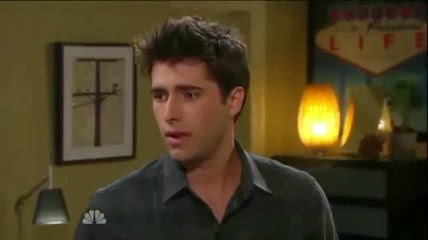 Will gets up from the sofa, and walks over to the desk, placing the contract on it, deliberately where Sonny can see.

WILL: Why? Because you don't like it? I thought you just said you believed in my work.
SONNY: I've told you why, Will. It's not about your talent or your work, it's that you're working for a corrupt organization--
WILL: That your Great Uncle owns. That your father works for as legal counsel. If they're so damned evil, why is it that every penny of your family's money stem from that corporation.

Sonny walks off toward the bedroom, shaking his head as Will follows him.

WILL: Don't walk away from me! You know I'm right.

Sonny stops and turns around, pointing angrily at Will.

SONNY: No. No, I don't know you're right, Will. In fact, I can give you a hundred reasons why this is the worst decision you could possibly make.

EJ stands in the DiMera living room, looking over some paperwork quickly, when he hears a commotion from the foyer.

After a moment of listening, he heads for the doorway and not long after, the doors to the living room swing open, with Harold trying in vain to keep an enraged Jennifer Horton from walking into the room.

JENNIFER: You!
EJ: Good Lord, Jennifer! I would've figured a family of middle class doctors would have raised their children to have better manners than that.
JENNIFER: Don't even START with me, EJ! I want answers.
EJ: About what?
JENNIFER: About where my daughter is, and why did you send her halfway across the world, and don't even think for a second it wasn't your idea, I saw you yesterday at the hospital, so give up the game!

EJ looks frustrated, and looks away for a moment to try to answer respectfully.

John steps into the Titan board room, striding in with casual confidence, much to Victor's chagrin.

VICTOR: John! What a surprise. I expect you've come for the meeting.
JOHN: Well, I wasn't planning on it, mostly because no one told me until just very recently.

John stops behind Kate's seat and casually puts a hand on Kate's shoulder. Kate tenses, a bit surprised by John's touch, but looks back to Victor, who notices the small but pointed gesture.

VICTOR: Fascinating.
JOHN: I thought so. Now, I've got a question for you, Vic.
VICTOR: Now isn't a great time, we're in the middle of a vote.

John puts both hands on his hips. A smile grows on John's face as he walks towards Victor.

JOHN: A vote, hm? See. Now, that actually, was exactly what my question was about.
VICTOR: Really.
JOHN: You know it! Here's what I wanna know, Vic. Have you retained Brady's place on the board, or have you had him declared dead?

Will folds his arms, looking unimpressed at Sonny as Sonny lays into him for considering the EnerNext job.

WILL: Alright. Go ahead, Sonny. Tell me why I shouldn't take the best damned job that's ever been offered to me.
SONNY: Will, there will be other jobs that are just as good as this one.
WILL: Oh, so I should follow my dreams, but only when they line up with your world view.
SONNY: Will, that's not what I'm saying.
WILL: Yes, it's exactly what you're saying! What makes you the authority on what's right and what's wrong?
SONNY: I'm saying that I know what it's like to have someone flash a lot of money in front of your face. It can change you really quickly.

Sonny walks in closer to Will and puts his hands on Will's shoulders. He looks intently into his eyes.

SONNY: I want you to be careful, Will.
WILL: I'm not exactly from a poor home, you know. I can take care of myself.

Sonny looks down, dropping his hands to his sides as he thinks his answer through.

SONNY: Okay. I don't think you should take this job, but if it's something you really want, and I mean truly, truly, want....then I will support that.

Will leans over and kisses Sonny on the lips. They both smile as they look warmly at each other.

WILL: Thank you.
SONNY: Just remember, Uncle Vic can suck in even the best, most generous people in the world, and turn them into cynical, bitter, entitled bastards. Watch yourself.

Will nods in understanding.

Will and Sonny come together for a warm embrace, before slowly leaning in to kiss each other gently on the lips. They look at each other, standing forehead-to-forehead and giggle before kissing again. Flopping down on the couch, they kiss a bit more intensely, before Will pushes Sonny back gently and climbs on top of him.

Gabi walks in just at that same moment and jumps back, but smiles as she sees her roommates together.

GABI: Well what did I just walk in on.

Sonny and Will laugh as they separate. Will jumps off the couch and heads towards Gabi, greeting her with a quick hug.

WILL: Ohhh nothing, just some fiancee/fiancee bonding time. Oh I have some news.
GABI: Oh yeah?

Will walks over to the desk again and pulls the contract from the manila envelope it had been in. He shows it to Gabi.

Gabi's eyes widen as she quickly looks at it.

Gabi and Will lean in to hug each other. Gabi's smiling widely as she embraces him. Will pulls back after their hug and looks at Gabi a little oddly.

Gabi's taken aback slightly by Will's statement. She walks past him, heading for the couch, where she quickly flops down.

Gabi looks at Sonny, who's sitting next to her on the sofa, and laughs a bit.

GABI: Well...if I am, it's because all of our troubles are soon gonna completely disappear.

EJ sighs as he walks over to the minibar and grabs a glass, holding it up as he speaks to an unimpressed Jenn.

EJ: You look like you could use a drink.

EJ turns around as Jenn smacks the glass from his hand, smashing it against the wall. EJ stands still, stunned by her rage.

EJ: Or several.
JENNIFER: This is not a game, EJ. I want to know where my daughter is.
EJ: Jennifer, your daughter took a job in Italy for a few weeks. It is not a big deal. It's a very short assignment that came up last minute. I apologize if she didn't talk to you about it, but I have a feeling, considering your rather hysterical reaction just now that I know why she didn't.

Jennifer, undaunted, steps in close to EJ, an intensity in her eyes that says she means business.

JENNIFER: My daughter would not have done anything like this if it weren't for you. She has been acting like a complete basket case for months ever since she quit the hospital.
EJ: And you blame me for that.
JENNIFER: Yes, I blame you! You are the only thing that connects all of this. Ever since you two have been talking about Jack's book, ever since she's been looking after Johnny and Sydney and Allie, then quitting her job out of nowhere to work for you and Sami.

EJ stops Jennifer, holding up one finger to make a quick interjection. He speaks almost too calmly back to an enraged Jennifer.

EJ: That was all Samantha's idea. She saw your daughter was in need and did what any good friend and shrewd businesswoman would do.
JENNIFER: Because of you. It's all because of you. It's so obvious to me now. You did something or said something to her that upset her so much that she was forced out of the hospital. Didn't you?

EJ rolls his eyes, worried that Jenn is onto him, he looks back at Jenn with a frustrated look.

Victor stands at the head of the board room table, looking on angrily at John.

VICTOR: How dare you? Of course I'm retaining Brady's seat on the board. No one's declared him dead yet, have you?
JOHN: Nope, I had no intention of it. I know strange things can happen in this town, and I won't believe he's gone until I see a body.
VICTOR: Then what the hell are you asking for?

John steps forward towards Victor and puts his briefcase down on the table. He speaks very casually, which is offputting to Victor.

JOHN: Well, Brady made me proxy in the event of his absence from all vital Titan board meetings, and I know that in the event of my absence, that you, Victor, would gain his proxy vote.

Victor sighs, knowing John is right, and with a glint of worry in Victor's eye.

VICTOR: That is the truth.
TYLER: We were just coming up on Brady's vote, in fact.
JOHN: Perfect. I'd be happy to help.

Victor looks sharply at Tyler, muttering to him in hopes John doesn't hear.

VICTOR: Be careful, Houston. We may be in big trouble now.
TYLER: (quietly) Well, you thought Kate and company were on your side as well, so John may surprise you yet.
VICTOR: Fair enough.

Kate looks at the goings on at the head of the table and pulls both Billie and Lucas in close.

Billie shushes both her mom and brother, pointing to the front of the board room.

Victor looks back John's way, as Tyler clears his throat, looking back toward John.

John looks calmly around the room, smiling as the rest of the room impatiently waits for his answer.