Sheryl picks up the phone in her office at Titan, she begins a conversation with a mysterious person, whom she is obviously very familiar with.

After a pause, she continues.

Sheryl puts down the phone and smiles broadly, before looking for a file, and heading from her office. She strides confidently to the door and closes it with a confident flourish.

Gabi sits at Hope's desk, pleading with her to look into Nick's supposedly renewed drug use.

GABI: Please, Hope. You have to go talk to Nick. You're my only hope.

Hope looks down, deep in thought about the decision before her.

After a pause that feels like an eternity, Hope answers.

GABI: Thank you! Thank you so much, Hope. I know I'm asking a lot but...you may have saved my life.

Gabi stands up and hugs Hope tightly. Hope reciprocates but with much less intensity than Gabi, as though she's still contemplating her decision.

HOPE: No problem, Gabi. I'll let you know how it goes, alright?

GABI: Okay! Thanks again, I know it's...I know it's a huge thing to ask of you, I just...want you to know that I do appreciate it.

Gabi grabs her purse and walks quickly out of Hope's office, waving goodbye as she does. Once outside the door, Gabi breathes a heavy sigh of relief, knowing that her plan has, so far, worked.

Inside, Hope sits back down, shaking her head at the dilemma she faces.

Daniel steps over to the nurses' station at University Hospital, where Maxine stands, staring into her computer. Despite this, Maxine knows Daniel is there.

MAXINE: Dr. Jonas, how are you this morning?

Maxine looks up to see a rather hungover doctor standing before her. She raises an eyebrow, knowingly.

MAXINE: Mmmhmm, that's what I thought.

DANIEL: Maxine, I don't want to hear it.

MAXINE: Did you at least have a good time last night?

Daniel looks away, hoping to avoid answering her question. Maxine continues to stare Daniel down.

Maxine sees a bit of a glimmer in Daniel's eye and gives him a knowing look. Her smirk disarms Daniel a bit, and he leans in to speak in confidence to her.

DANIEL: I can't tell you anything more than that.

Maxine makes a mock-insulted face, and Daniel laughs before walking away.

As Daniel walks away, he looks down at his notes. About to make his rounds, he notices the first name on the page. Theresa. He looks up at her hospital room door and sighs, struck by the sadness of the situation.

Kim sits in the waiting room outside Aiden's office as Aiden's secretary hangs up the phone at the desk next to Kim. She looks at Kim with a smile.

Kim timidly opens the door to Aiden's office and steps in, closing it carefully behind her.

Aiden strides over to Kim confidently and shakes her hand. Aiden smiles warmly, while Kim looks up with a bit of trepidation, smiling only momentarily, almost sheepishly.

Aiden motions for Kim to have a seat at his desk, at which point Aiden steps back towards his side of the desk.

AIDEN: Please, Kim. Have a seat. So what is it I can help you with, exactly?

KIM: Well...I need you to give me a little advice about a family...situation.

AIDEN: Okay...what exactly is it?

KIM: It's my daughter, Theresa. She's been in an accident, and she's...unfortunately in the hospital.

Aiden looks at Kim with concern.

AIDEN: I'm...really sorry to hear about that. Is there a problem at University Hospital or something?

AIDEN: Then what's the problem?

KIM: To be blunt, I need you to find a way to keep Billie Reed out of Theresa's hospital room.

Marlena and John are in Marlena's office at the hospital, as Marlena steps back from John, stunned at what he'd just told her.

MARLENA: I'm sorry? You saw what?

John steps forward towards Marlena, who is still upset by John's sudden change of heart about salvaging their marriage.

JOHN: The first thing I see when I come back to town, Doc. You and...Roman. I saw you comforting him on that bench, Doc.

MARLENA: You have absolutely no idea what that was about, John!

MARLENA: How could you possibly?! You've been gone for months! No one's heard boo from you! And suddenly you know exactly what's going on?

John holds up his hands to indicate to Marlena to calm down. Marlena doesn't agree.

JOHN (talking over her) Doc, I'm not saying what you think I am...Doc. Come on now.

MARLENA: I was comforting Roman because he...

JOHN: Doc! You don't have to explain anything to me. Just...be good to him. Alright?

Marlena looks at John with confusion in her face, realizing that John isn't upset but giving her up.

John sighs heavily, visibly pained by what he has to tell Marlena, but he finally struggles to spit it out.

JOHN: My lawyers will contact you in the morning. We'll get the divorce proceedings finalized. I want this to be quick and painless for both of us.

MARLENA: John! What do you mean?

John heads for the door and steps into the hall. Marlena can only stand still in shock as he leaves.

JOHN: I'll be gone by morning.

Marlena follows John to the door as he walks off. She stops and looks on with hurt and utter confusion on her face as he disappears into the busy hospital.

Aiden thinks for a moment before standing up from his desk and pacing the room.

AIDEN: I mean...this is a big step. Is this Billie...Miss Reed is she...is she a threat to Theresa at all?

Kim sneers at the thought of Billie as she responds.

KIM: Well, if you ask me she's a threat to anyone within a 100 mile radius of her.

AIDEN: Okay, but...legally. Can we make a case against this woman? Because you can do one of two things here, y'see. You can either just talk with the hospital administration and ask that Theresa be put under a stricter visitor list. Only immediate family admitted, and those usually work but they're...hard to enforce in a hospital the size of University Hospital.

KIM: Right. I mean...I used to work at University Hospital so I know that all too well.

Aiden walks over to the edge of his desk and sits on the corner of it, looking at Kim for some kind of response.

AIDEN: Exactly, and then there's a restraining order, which is effective, but...extreme.

Kim looks up at Aiden with a sudden shift in demeanour. Suddenly her near-timidity vanishes and a look of steel resolve flashes in her eyes as they stare unwaveringly at Aiden.

KIM: That woman has done more damage to my family than anyone, even Stefano DiMera could dream of. I want her away from my daughter if it's the last thing I do.

Aiden's eyes immediately widen at the fire that emerged in Kim's eyes, deadlocked into his own.

Kate looks at Billie with some slight confusion in her face before she snaps back to her usual calm, collected visage.

KATE: Nick Fallon has absolutely nothing to do with anything I do. I was just saying that Nick was telling me that he overheard from a board member on the elevator this morning that we may end up with major fines from the FCC if we keep the station. The conflict of interest in this is crystal clear, Billie.

BILLIE: Well...he has a point. But I don't know why you're trusting conjecture from Nick.

KATE: Because he's right more often than he's wrong. Whether he's a psychopath or not.

Kate grabs her briefcase and heads for the door of her office.

KATE: Now. We have a board meeting to go to. Can I count on you to vote with me on this?

Billie mulls it over for a moment before responding. She nods hesitantly.

Kate smiles and opens the door to her office.

Kate motions Billie from her office and she and her daughter head for the board room.

As they walk into the lobby, Lucas steps off the elevator, much to Kate's delight. She quickly motions her son over to her side.

KATE: Ahhh! Lucas! I have something I need to talk to you about.

Wrapping her arm over Lucas' shoulder, Lucas looks over to her with a more than bit of worry in his eyes as they walk off to the board meeting.

LUCAS: Uh oh. What did you do now?

Nick is in his lab, making a face of pain as he pinches the bridge of his nose. Still reeling a bit from his hangover, he reaches into his briefcase, and pulls out the bottle of "Aspirin" from his bag. Quickly walking over to the water cooler, he grabs a paper cup and downs the pill and the water.

Refreshed, and trying to shake off the hangover pains, he walks back to his bag, closing it up when he gets a call from Sheryl. Looking at his phone before answering, he answers with a cocky smile on his face.

NICK: Yeah, just packing up to head home for lunch...well why wouldn't I?...Yeah. Everything's gonna work out exactly according to plan.

JJ stands in the Horton living room, and looks at Jennifer before holding up his hands in surrender.

JJ: Okay, you got me. I was driving Abigail to the airport this morning.

JENNIFER: What? What do you mean? Where is Abby?

Jennifer tenses with worry, she almost explodes at JJ from the shock of his news.

JJ: It was for work, it's...DiMera...it's a...project they wanted specifically her to work on. It was...really last minute.

JENNIFER: OH that's what YOU think!

Jennifer makes a beeline for the phone, but JJ follows her and stops her before she can pick it up.

JJ: Mom, what are you doing?

JENNIFER: I am going to call the airport and stop them before that plane takes off.

JJ: You can't! It's already taken off. They left hours ago. 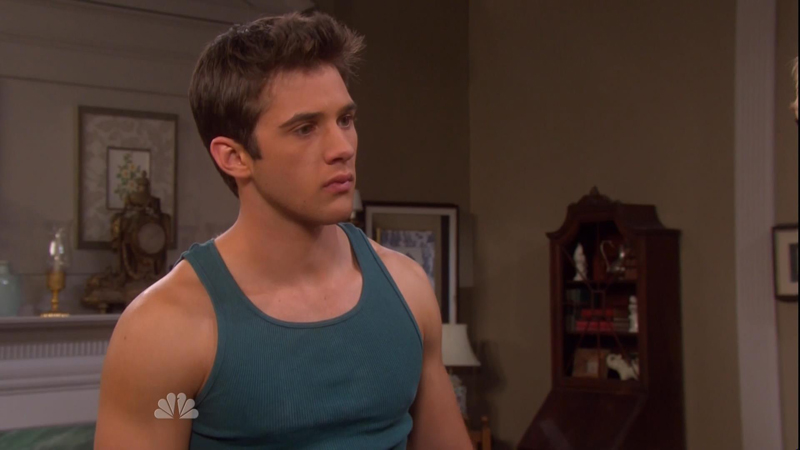 JJ looks away, shaking his head as well at his mother's grave accusation. At the same moment, Jennifer grabs her jacket and purse from the table, never once taking her eyes off JJ.

JENNIFER: I'm going to have a little chat with your sister's boss.

Jennifer doesn't listen and slams the door shut before JJ can get a word in. JJ is left behind, holding back his urge to slam his fist down.