--Angela sits behind her desk, clutching her head in her hands and feeling nauseated. When she opens her eyes, she sees Ted standing there.

"And good morning to you too, Mr. Capwell. I'm just a little under the weather, that's all. With the amount of work I'm doing both here and at Capwell, that's to be expected. What brings my handsome husband by anyway? Something on your mind."

"Actually yes. The other day with Gina in fact. Something was going on there Angela, and I don't think it had anything to do with promoting Gina Jeans either."

Angela pauses for a moment, nervously staring back at her husband.

"What was it that she was taunting you about?"

"Her daughter, what else? She still is reeling from the fact that you married me and not Lily, probably because it ruined any chances of Gina being a Capwell, Ted. Yes I know what I did wasn't.......I didn't go about it the right way. But I make no apologies for loving you. Or marrying you for that matter. You know Ted, I was married to David for a number of years and while I enjoyed the wealth and the prestige that went along with that, I was more in love with our status than him. Then there was Warren, who frankly, didn't have the capacity to love anyone but himself at the time. But when I met you......it was different. Sure at first, it was just sex..."

"Just sex? Fantastic, off the charts, hot, amazing sex, the best sex I've ever had in my-"

"Ok, ok, I see what you're getting that. And that's all I thought it was, honestly. My using you to fill the void I felt from Warren's inability to return my feelings. Frankly, I don't think I was ever in love with Warren, more the idea of him. But you. You were kind, gentle, caring, the kind of man I never felt I deserved in my life, especially after what happened to my sister Marilyn all those years ago, which I fully blamed myself for. You showed me what real love could be like, and yet I didn't think I deserved you, that you deserved better. Which is why I ended it and began dating your father. I knew he was one person I could be with that you wouldn't be able to stand to watch and I was right. But then I saw you dating Lily. And I could see how much she loved you and that you clearly cared about her. I wasn't in love with your father but I just wanted you to be happy. Or so I thought."

"Well yes, I thought. But then we'd be in a room together and I couldn't bare not to be with you. Then, when we were trapped in that explosion....I saw how gentle you were with me, how you assured me we were going to be alright. And I realized then that I was in love with you. Actually, when you'd fallen asleep, I told you so. And I realized that all these years, I'd been depriving myself of something wonderful, to be loved in a way I never thought I could because I didn't deserve it. I knew I had to let go of all of that and more importantly, I knew that you loved me and whether you cared for Lily or not, you were going to marry her out of a sense of obligation, the same reason I had married David and almost CC. I couldn't put you through that and I don't think I could have handled it. So yes, I did some nasty, underhanded things. Like seducing you. Like having Lily kidnapped and donning a wedding dress and stealing her wedding. But I did that out of love for you and sometimes in life, you have to fight for what you want, for what's right, even if you have to fight dirty. I wasn't going to deprive myself out of that kind of love any longer and there was no way I was going to let you deprive yourself either. And when you agreed to married me that day.....you made me the happiest woman I've ever been in my life. I love you Ted Capwell and I always will, no matter what happens. Please, don't ever doubt that."

Angela gets up from her desk and walks toward Ted. Just as she's about to walk into his arms, she faints and he catches her, shocked.

---Kirk and Pearl sit patiently waiting for Eden to arrive. They see her walking toward them with an assistant and a half a dozen bags.

"Edie, what is this? Your entire closet?"

"A woman can never be too prepared. Besides, I brought a few disguises along with me, you know, for sleuthing?"

"What? Fight with me and try and prevent me from being involved in the investigation? And when did that ever work Pearl?"

"You did always have a knack for doin the exact opposite of what the police captain told ya to do, didn't ya?"

"He just didn't like it because I ended up being the one to crack his cases. You know I've never been one to shy away from danger. Speaking of, hello Kirk? Ready to be implicated in a crime we all know you had something to do with?"

"I've told you and I'll tell you again- I've changed my life, who I am. I just hope you'll soon be able to see that and realize that-"

"Spare me. Anyhow, daddy's jet is ready. Are we all set?"

"Sure are. Oh and I gave Kell a call and she and Ashton said they want us to stay in his father's castle. I figured having the support of your sister would help you keep a level head."

"Thanks. I'm looking forward to seeing Kelly. Her husband, on the other hand....."

"What? You have some kind of problem with this Ashton guy?"

"There's just something about him. He seemed a little to interested in my life. Mine and Cruz's. And Daddy clearly doesn't like him and he's always been a pretty good judge of character..."

"Edie, let me remind you- he approved of Kirkie here, he didn't like Cruz at first, he married Pamela, then Gina, he's let that Elizabeth woman walk all over him, he has illegitame children all over the world that keep popping up..."

"Yes, well, on this one, I think he may be right. This Ashton Lavery just seems to....perfect. I hope for Kelly's sake that I'm wrong because for all the trouble with men in her life, I'd like nothing more for her to find some happiness. With the RIGHT guy."

"Make it fast, Kirk. Because I'd be more than happy to leave you behind. You could take your company's jet you know."

"It will be just a minute, I promise. Would you mind taking my bags Pearl?"

Kirk walks away as they board the plane. He answers the phone and it's Santana on the other end.

"It's about time I heard from you. What the hell is going on with Castillo?"

"Relax Kirk, he had thought it was 1986 and that we're still married. But there is one problem."

"We need to make it legal. And the only way we can do that is if he divorces Eden. Now I can get Cruz to sign the papers, but how on Earth are you going to get Eden to sign them without her realizing what's going on."

"You just leave that to me. I'll have Eden in a position where she'll be more than ready to sign those papers very soon. Now I've got to go, but leave Eden to me. You just handle Castillo."

Kirk hangs up and begins walking toward the plane when someone grabs him and turns him around. 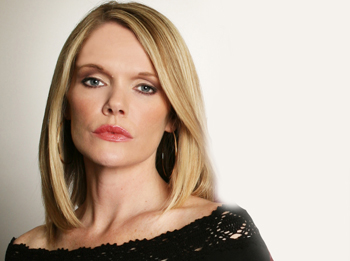 "Just what the hell do you think you're up to Kirk? And you better tell me the truth or so help me, I'll march right onto that plane and tell Eden everything I know. EVERYTHING!"